Hapkido is a uniquely comprehensive ancient Korean art that is gaining a huge following around the world as an incredibly practical self-defence system. This is because Hapkido techniques do not require strength and, in conflict situations, they allow the defender to gain complete control with minimal effort and without aggression or injuries to the attacker. The art of Hapkido has the most varied types of techniques and offers extensive training in many disciplines, including correct breathing techniques, kicking techniques, pressure points, joint-locking, submissions, throwing techniques, weaponry and falling techniques that are vital for self-protection in real-life situations. In addition, training in Hapkido has benefited people all over the world, from all walks of life, including action movie actors / actresses, professional athletes, sports teams, and Olympic gold medalists. As well as being open to the general public, Hapkido has also been in popular demand by police and security forces around the world. It has been taught in the US White House, and to the bodyguards of the Prime Minister of South Vietnam, as well as to the Crown Prince of Bahrain and his bodyguards. In addition, it has been taught to US and Korean Law Enforcement, Military, and Special Forces, as well as to the French RAID Police, the Singapore Police Academy, and the UK’s Durham Constabulary. Hapkido is also still taught in the Bodyguard Unit of Korean Presidential Office and a Korea Hapkido Black belt certificate is required to gain positions within Korea's Special Police, Special Warfare Command, or as a special bodyguard to the President himself.

What we teach and Practice in Hapkido

Sŏn 善 & Meditation
Sŏn means inner calmness and relaxation. By attentiveness and intensive internal concentration a new sensitivity can be reached which helps to control the ups and downs of life. By this means Sŏn can be applied effectively in daily life.

Sulki (Self-Defence Techniques)
Self Defence techniques consist of multifold movements freeing oneself from the grip, punch, kick and / or other forms of attack of an opponent. They often include exerting pressure on vital points of energy similar to those used in acupuncture or acupressure. Applied in training these actions are performed as massage rather than for inflicting pain, thus providing flexibility and health rather than injury. Applied against an attack, however, they are a most efficient means of self defense.

Kicks
By practising various kinds of kicks (high kicks, low kicks, basic kicks, advanced skill kicks, etc.) we fully extend our flexibility and body balance. In addition, we learn how to defend ourselves most efficiently in a necessary situation and learn how to counter-attack our opponent's attack by applying kicking skills.

Breakfalls
By exercising breakfall techniques we learn to fall like cats do - without fear, naturally and softly. Thereby we gain trust to the ground, and also learn to release inner tension. 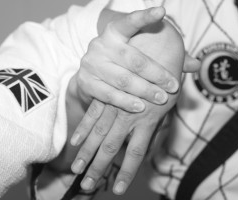 In fact many people would categorize Hapkido as a “scientific” martial art as every aspect of it is geared towards a single purpose: incapacitating an opponent in the most efficient and thorough manner possible. The best way to achieve this result is through the Theory of Dynamics.
The simplest definition of this theory can be found in the translation of the word Hapkido: “The art of coordinating energy”

Dynamic motion means more than just a quick reaction. To react dynamically is to create a balance between two opposing forces and use it to your advantage. ‘Yin’ and ‘Yang’, or the concept of balance is the cornerstone of Hapkido philosophy. The key to creating this balance can be found in the three principles of Hapkido.
Circle
Water
Coordination

While each of these principles is important in their own right, they all stem from the Theory of Circular Motion. The Theory of Circular Motion states that the body must become a dynamic centre of motion. Like a spinning top, the body must be in a state of continuous motion in order to maintain balance, however when the top stops spinning it will lose it’s balance and tip over and this theory applies to the body as well.

Next is The Theory of Water.
The Theory of Water states that all body movements must be fluid like water. This means your techniques must be adaptable. Water in a river will pull a pebble with the current, go around a boulder or carve a valley through a wall of rock.

Finally, The Theory of Coordination.
This theory is nothing more than the coordination of the previous two. Continuous and fluid motion makes for a most destructive force. A hurricane is a good example of the Theory of Co-ordination. A hurricane-like air spins around absorbing everything and at the same time throwing off everything as long as it’s motion is continuous. Not many physical structures could withstand the force of a hurricane. In Hapkido we take the Theory of Dynamics and combine it with a thorough knowledge of the vital spots of the human body. There are over 400 vulnerable spots on the human body, 54 of which we use as targets of attack. The locations of these vital spots usually coincide with those of the nerves, blood vessels, or internal organs. When these vital spots are attacked the result can be anything from death to impairment or severe pain. This knowledge is necessary to a successful attack or defense. 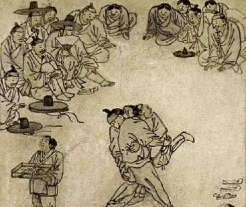 The history of Hapkido goes back to Kochosun(old name of Korea) era (BC 2333 – 108).As Kochosun territory facing the North bordered on China, an early form of Hapkido emerged naturally as an effective means of protecting the country and its people from the war with China.

According to the oldest Korean scriptures,Sam-il-sin-ko, Hapkido is a way of cultivating people who practice it by concentrating Chon-ki (energy of the universe), Chi-ki (energy of the earth), and In-ki (energy of human) into his/her Dan-Jeon (the place where human energy is stored; about two inches below the belly button).By practicing this he/she could use the energy at his/her will and apply the energy to various ways.
The ultimate attainment of this practice is to realise him/herself and to procure sagacity and rectitude. The old form of Hapkido (Hapki-yu-sul) had been practised among nobility of the Shilla Dynasty (AD 350-918).Some nobility of the Shilla Dynasty went abroad to Japan and settled down there.One of these noble families was Sam-rang-won-ui-kwang. They taught their skills to the famous Japanese Minamodo Family, of which Dakeda Shogaku was a descendent (35th generation). Dakeda Shogaku instructed Yong-Sul Choi, who is the founder of modern Korean Hapkido, for around thirty years. Of Shogaku’s pupils, Master Yong-Sul Choi was the only one who mastered all the secrets and special skills of Hapki-yu-sul.Ueshiba Morie, who is the founder of Japanese Aikido, was another of Dakeda Shogaku’spupils, but he mastered limited skills of Hapki-Yu-Sul as he stopped practising under Dakeda Shogaku. Master Yong-Sul Choi trained Han-Jae Ji, who shaped the current form of Hapkido by compiling Hapki-yu-sul with Korean traditional kicking techniques.

Aikido
As in Aikido, the attacker is encouraged to over-commit their attack. The attack is received with minimal resistance and is guided past the target and then the defenders own force is added to it. The result is to overbalance and throw the opponent. However, opponents do not always attack with large movements, often short jabs and kicks are delivered with such rapidity that it is very difficult to lead the opponents force. In these situations, the close quarter blocking and striking techniques of Hapkido give the Hapkidoist knowledge of how to counter and overcome such attacks.

Jujitsu
Many of the joint locks and throws of Hapkido are very similiar to those of Jujitsu. Painful twisting of the joints and tendons along with the application of painful pressure to vital points combined with a thorough knowledge of human anatomy help to control any opponent regardless of size or strength. These techniques work well for close-quarter attacks, however because Jujitsu practitioners do not practice their techniques against proficient kickers or punchers they are vulnerable to such long range attacks. Hapkidoists practice kicks and punches to a high degree of proficiency, thus the familiarity gained through practicing the techniques helps in defending against them.

Taekwondo
Virtually all of the kicking techniques of Taekwondo are similar to those of Hapkido. spinning kicks, thrusts, circular kicks and sweeps are all utilised. Due to the fact that Hapkido is not a tournament orientated style, other techniques, such as low spinning kicks, low-section kicks and knee strikes, are also used. The basic hand techniques of Hapkido are similar to those of Taekwondo, that is, mainly linear attacks with fist or knife hand. However in a confined space such as a crowded public bar or a narrow hallway kicks are limited in their practicality. Self-defense tools such as elbows, knees, head butts and joint attacks are essential for survival in such situations. All of these techniques are practiced in Hapkido to produce a thorough knowledge of all ranges of attack and defence.

Kung Fu
In Hapkido, as the student advances past the basic hand techniques, more emphasis is placed on small circular techniques and fast close-quarter parrying which resemble the techniques of Kung Fu. Advanced weaponry techniques using the 6″ Bo Staff and the fan are similar to those of Kung Fu.

Judo
Throwing plays an important role in Hapkido. The basic principle of Judo is used in Hapkido: moving your opponents centre of balance to a vulnerable position and using your leg or body to topple the opponent. Hapkido also uses strikes or pressure points to manoeuvre the opponent with less use of strength.

Kummooyeh (Sword & Archery)
Kummooyeh is an authentic Korean swordsmanship style with a traditional archery. It is composed of various types of training including meditation, basic swords movements, patterns, cutting, sparring techniques and Korean traditional archery. In our school, at advanced stage of Hapkido, students are taught Kummooyeh. However, anyone can start Kummooyeh as a separate martial art.

About UsFormsFAQShippingTerms of ServicePrivacy PolicyCookie PolicyContact Us